Signs of Fargo’s Past: Fargo Linoleum

Did you know phone numbers only used to have five digits? Well, if you’re anything like us you probably had no idea. After talking with the owners of Fargo Linoleum, a business that used to be home to a five digit phone number, we learned all that and more! In fact, Fargo Linoleum is the oldest floor covering store between Minneapolis and Seattle! Their sign, resembling a roll of flooring, was put up in the 1960s; however, it was manufactured somewhere around the 1930s! Although Fargo Linoleum has moved locations, their sign has remained the same carrying many memories with it. We are proud to present Signs of Fargo’s Past featuring Fargo Linoleum. 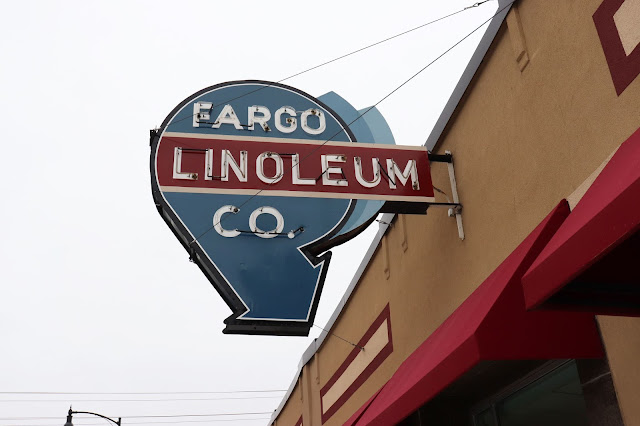 Can I have your (five digit) number?

Fargo Linoleum’s sign hasn’t only changed locations, but has also gotten a face lift! Prior to the move, the sign stood tall on second avenue throughout the 1970s welcoming customers into the storefront. The store also used to feature an additional sign along the side of the building. On that sign you will note a certain five digit number… what was it for you ask? Well, that was the phone number. That’s right only five digits were needed to reach Fargo Linoleum. We found this same number on a variety of ads, yardsticks and potholders all used for advertising purposes! Another unique feature of their sign is that most of the repairs were done while the sign was still hanging. In order to take it into a shop the sign had to be UL listed. These listings are common practice now; however, due to the age of the sign it didn’t need to meet these requirements at the time. It has since been updated to repair the neon during a major reviving of the  Renaissance zone and historical storefront in Downtown Fargo. The owners, Jana and Rob, were quick to note that all businesses had neon signs back in the day – many of which still decorate our downtown today! 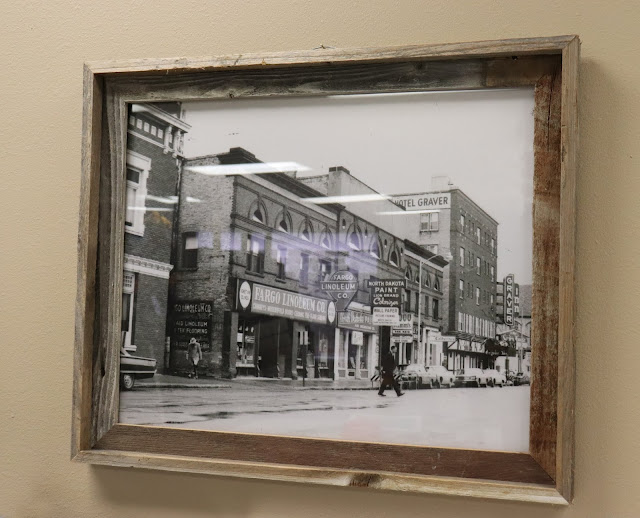 Fargo Linoleum moved to their new location to meet the growing needs of the business. Although one sign fell apart in their recent remodel, their new building still carries many pieces of history including a few old auto parts. Yes, you read that right! The building that is home to Fargo Linoleum used to be an auto body shop. Prior to their recent remodel (which everyone should check out by the way), Jana and Rob had heard rumors of old vintage car parts being stored in the ceiling. When the time came to have an electrician update some wiring, it prompted further investigation. Not only did he find an old 1930 leather backseat, but he also found a series of invoices from the 1940s. Oh and by the way, those invoices, feature repairs of cars for a total of around $142…work that today would cost MUCH more than that! Fargo Linoleum also expanded their location into what used to be an old cafe. One unique feature of the cafe was a series of light bulbs that used to sit in the back corner of Fargo Linoleum’s stockroom. These light bulbs would illuminate when a server’s food was ready to run! Talk about your bright idea! 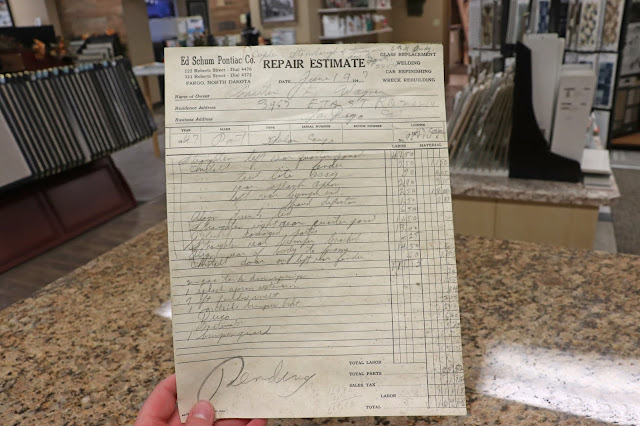 Now, Fargo linoleum has always been a family business. Rob, currently in sales, spoke of his father who started working sweeping floors and worked his way up to the top. However, another interesting story is that Rose Gregerson was part-owner back in the 1970s when it was relatively unheard of for a woman to be in that position. She then sold her stock to Rob’s father leading to the store’s current ownership. Since then there have been two sets of father and son duos to manage the business. Currently, they have Jana Bye at the helm as Fargo Linoleum’s President! 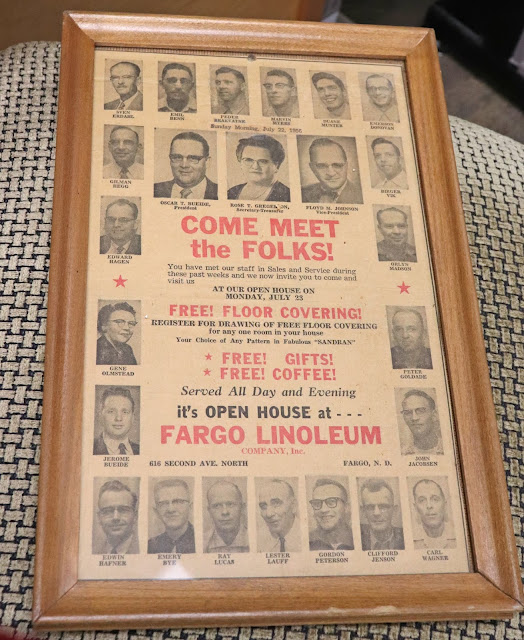 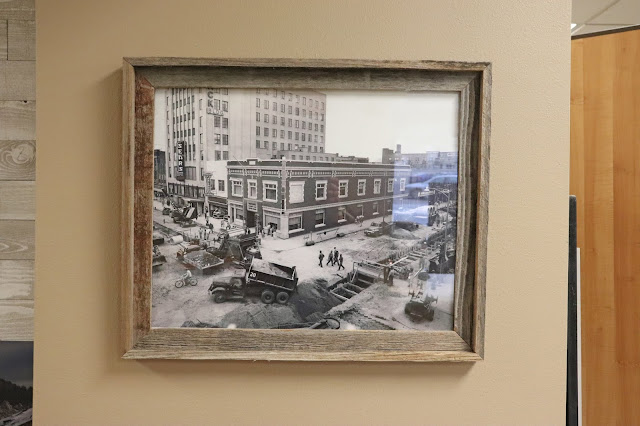 Being the oldest flooring covering store between Minneapolis and Seattle is no small task, but we know the team at Fargo Linoleum will rise to the occasion. From their vintage sign to hidden car parts and old cafes, they’ve seen it all. It was a privilege to hear stories of five digit phone numbers and even get a chance to hold some vintage flooring tools. Next time you are in need of floor covering and more, give Fargo Linoleum a call (you’ll have to use all seven digits now)! If you’re lucky they might even bring out their time capsule to show you! Shout-out to Jana and Rob for taking time out of their busy schedules to tell us more about their sign as we work to uncover the Signs of Fargo’s past!