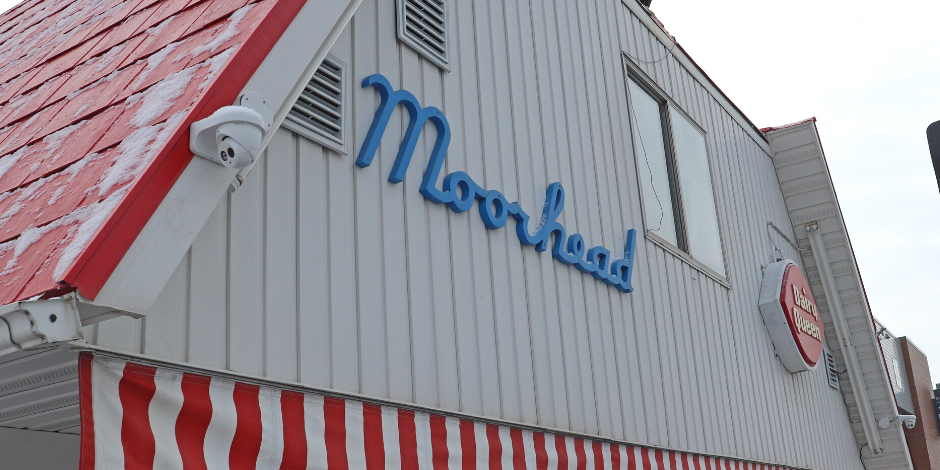 It’s almost spring – even if there is still snow on the ground in our headquarters in Fargo, North Dakota. How do we know this? Well, the Moorhead Dairy Queen is opening – the first real sign that we have survived another long winter and deserve a blizzard that doesn’t trap us in our homes. The Moorhead Dairy Queen has been a landmark to the Fargo-Moorhead community opening every March 1st to serve delicious treats from their walk-up window service. This week we have a story that makes our hearts melt as we interviewed an establishment that has been serving up smiles since 1949. This blog couldn’t be sweeter – time for Signs of Fargo-Moorhead’s Past – Moorhead Dairy Queen:

The Dairy Queen in Moorhead has been turning heads since opening in 1949 under the ownership of Bob and Phylis Litherland. This makes it one of the oldest Dairy Queens in the system. The contract signed in 1949 is a deal that has let this Moorhead Dairy Queen stay true to the traditional aspects of the store. While the ice cream may not have changed, their sign sure has. The original sign was installed by LeRoy Sign Company back in the 1950s. Since then it has shifted to the traditional Dairy Queen ellipse when the DeLeons took ownership in 1995. However, the sign was so faded updates were made in the mid-1990s to what you see today. Another new addition – the world’s largest dilly bar standing proudly in the place it was created.

Yes, you read that right. The dilly bar was created right here in Moorhead, Minnesota! Although Dairy Queen Headquarters will never officially give the store the credit, they won’t deny it either. In the 1950s a Kohler salesman stopped by Litherland’s Dairy Queen and started talking about new treat ideas. Litherland pressed a thick disk of ice cream onto a piece of cardboard and the salesman put a tongue depressor through the base making an ice cream lollipop. After they dipped it in chocolate they held it up and someone said “isn’t that a dilly!” which was slang for “eureka” at the time. The rest is history.

That contract we mentioned, signed all the way back in 1949, has never been adapted. DeLeon stated, “there aren’t enough zeroes” to make him go to corporate conformity. This allows this specific Dairy Queen, not DQ, to create creations like no other. “To us, everything we do is Dairy Queen, not DQ.” These creations include Chipper Sandwiches (ice cream between two chocolate chip cookies and dipped in chocolate), Mr. Malties (frozen chocolate malts on a stick), Monkey Tails (chocolate-dipped frozen bananas), and Old Fashion Sodas. They also have discontinued toppings and a local menu with Nathan’s hot dogs, homemade chili and BBQs, curly shakes, and polish sausages. All are made with local ingredients whenever possible. Want something specific? Just ask! They are happy to make a blizzard with chocolate ice cream and four sprinkles if that makes their customers happy. Did we mention their ice cream cakes! Unlike other DQs, this Dairy Queen makes all of their ice cream cakes by hand as they did in 1949. If they taste better it might be that extra love from Troy DeLeon assembling them himself (and the lack of corporate conformity preservatives).

A sweet treat shop with some sweet signs. We couldn’t be more excited for the Fargo-Moorhead start of spring with the official opening of the Moorhead Dairy Queen. If you get to see these cool signs in person, thank the hardworking employees in the tie-dye shirts. There’s more that goes into old-fashioned ice cream than you think! Don’t believe us? Give it a try for yourself, your taste buds will thank you and so will the local folks here in Fargo-Moorhead. Thank you for tuning in to Signs of Fargo-Moorhead’s Past – Moorhead Dairy Queen.