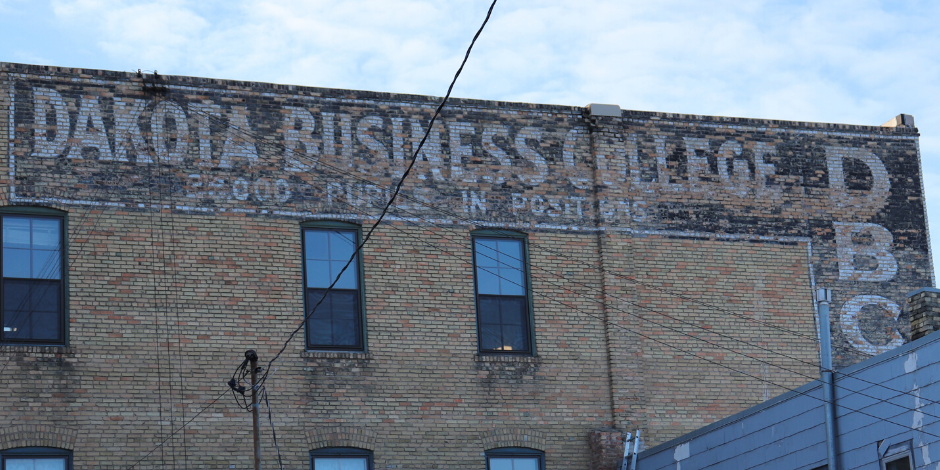 Our story begins in 1894. Back when times were just a tad different: Coca-Cola was sold in bottles for the first time, Karl Benz received a US patent for a gasoline-driven automobile, Milton Hershey established Hershey Chocolate Company and F. Leland Watkins established Dakota Business College – an establishment whose ghost sign only remains. That, my signage loving friends is where our story begins:

The building was originally designed by architect Charles Daniels in 1884. The first owner of the building used it as a meeting place for the Masonic Shiloh Lodge (No. 8).  Now our story takes a quick journey to Columbia, Missouri to the life of F. Leland Watkins, a man that would become the President of the Dakota Business College. He first started out picking worms for money. He was paid 50 cents per day to pick worms from tobacco leaves. That same year he purchased a horse sick with mange for only $5. After nursing it back to health he sold it for $110 and used the profit to purchase a printing company to put himself through college. Watkins sold the printing company and the paper in 1892 and arrived in Fargo in 1893. It is there that he borrowed $500 from the First National Bank and opened the Northwestern College of Commerce complete with five students and one teacher.  Watkins had a business partner, Mathias F. Knox, who established the college together. In the fall of 1894, after collecting tuition from students, Watkins arrived to find Knox missing along with the money. While some may have taken this as a sign to abandon the business venture, Watkins didn’t stop there. By 1903, he had purchased the entire building, expanded and renovated the third floor into a gymnasium. Watkins worked as the janitor, secretary, receptionist and president; however, his hard work paid off as many notable students began graduating from his school.

Dakota Business College was home to many students striving to make it in the business world. Students reminisce on the large roll top desks and the worst speed writing classes out there. Rumor has it that the class began with 20 students and only three finished. Now we can’t forget the classic typing classes on the manual Royal typewriters. Many hopeful bankers walked these hallowed marble and wood hallways – hallways that were sure to creak with every step. The college also held penmanship classes as accountants making entries in books needed beautiful handwriting, such good handwriting that quarters were placed on the backs of students’ hands to keep them flat!. Many practice sketches can still be found today, all made in similar fashion. This accounting skill also transferred to many other trades as some students wrote wedding invitations on the side. We can only imagine the hours spent writing prior to the days of our standard office sign operations!

Dakota Business College was more than it’s classes; in fact, it was also home to a basketball program. The college believed that a successful business person was also physically fit, leading to the third floor being reconstructed in a gym. The program started even before the gym was completed with both a women’s and a men’s “Famous Basket Ball Team.”  Those students with a hankering for the sweeter things in life found themselves in a neighboring establishment located right below our ghost sign, Dutch Maid Ice Cream. It is there where many ate double scoops of ice cream, chocolate malts and roast beef sandwiches. Talk about a sweet spot – we might have to see if we can track down that sign next time… meanwhile back at Dakota Business College many students grew into successful business professionals all because of the worm-picking, horse nursing, president and teacher, Watkins. So much so that after his passing poems were written detailing his classes and work ethic. Check out those poems here. Don’t worry his students are still writing.

This ghost sign took us on a journey through time when handwriting was valued and typing was a new phenomenon to many students. The Dakota Business College helped mold many business professionals and Fargo as we know it today. While we wish we could go back to learn the notorious penmanship scripts, we will have to settle for dreaming about chocolate malts and taking in what’s left of the old ghost sign. Until next time, we are signing off.