A pink outlined feline sign has quite the story here in Fargo journeying all the way from Downtown Fargo to South Fargo for her final retirement! This week we met with the owner of Frank’s Lounge, Jeff Thomas, the current owner of the Pink Pussy Cat sign. The original Pink Pussy Cat lounge started in Downtown Fargo in the 1960s and was often a hangout for businessmen to meet after a long day at work for a libation after hours. The pink neon sign in the shape of a cat brings back a lot of memories from the locals and recalls a piece of the Fargo bar’s history! During our chat we discovered the history of a feline sign, the memories of once youngsters that waited outside near its light & much more in this week’s edition of Signs of Fargo’s Past: 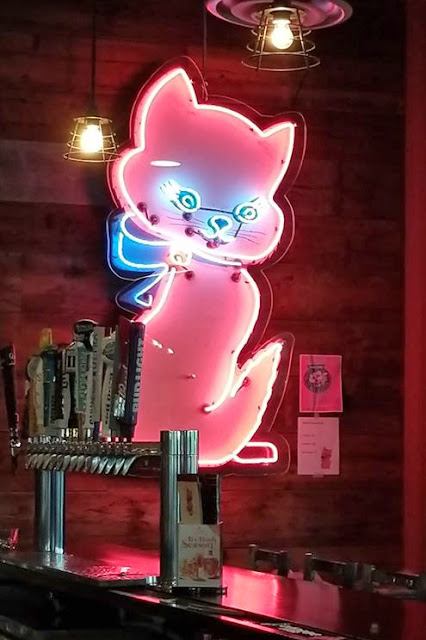 The Pink Pussy Cat Lounge was once a local watering hole for the many business men that came to Fargo! It was a downtown hot spot until around the 1980s when it was shut down for a newfangled concept of a shopping mall and the lounge was torn down to make a parking lot. Many have memories of waiting outside the sign for the parents or driving by the sign utterly enchanted by the pink glow & a wink of the friendly feline. Now, we have to admit we did come across some rough stories in the lounge’s history, but hey we all have some times we aren’t proud of. However, it seems like the famous sign carried a positive experience for all who basked in its glow! How did Frank’s Lounge and the Pink Pussy Cat collide? Well, that’s a story of a man named Jeff Thomas and his life long dream of opening a bar. The Pink Pussy Cat Lounge was a staple for Downtown for many years and was often the bar to be at in its prime. Jeff wanted to incorporate the old glory of Downtown Fargo in his new bar and began looking for pieces of the signs – which were originally sold at auction. He came into contact with Mario from Olivieri’s Hair Salon (son of Josef from our last edition read more here) and knew that Mario had purchased the sign for hair runway shows. After discussing the deal Mario realized that the sign was a piece of art and needed to be appreciated daily at a place like Frank’s Lounge. Now, why Frank’s Lounge and not just bring back the famous feline establishment? Well, given the bars new location it was important to pick a name that fit the new neighborhood and Frank was Jeff’s father so it seemed only fitting. The sign itself is one of three signs that were in the old downtown spot. The largest of the signs is on a farmstead near Page, North Dakota and stands around 20 feet tall. The one at Frank’s Lounge is a small version of the sign and a local contractor has the final piece of the trio. 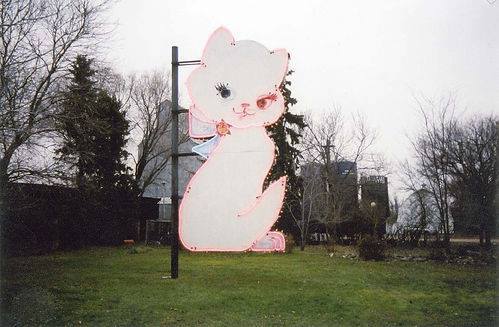 When you visit Frank’s Lounge (which we highly suggest you do for many reasons) you will find that the Pink Pussy Cat is not the only unique sign in the establishment. In fact, there is an old Quality Bakery sign that is a repainted Bob’s Big Boy sign. If you look closely you can even see a Pink Pussy Cat holding up a burger! Jeff told us that the old Quality Bakery used to be the place for Saturday donuts on special occasions! Jeff also told us that many patrons come to Frank’s simply to take pictures with the Pink Pussy Cat recounting many old memories of waiting by the sign for their parents or being infatuated with the pink glowing feline (who used to blink in her prime). It seems that the memories shared by the community have even more to do with the sign than they did with the old bar! 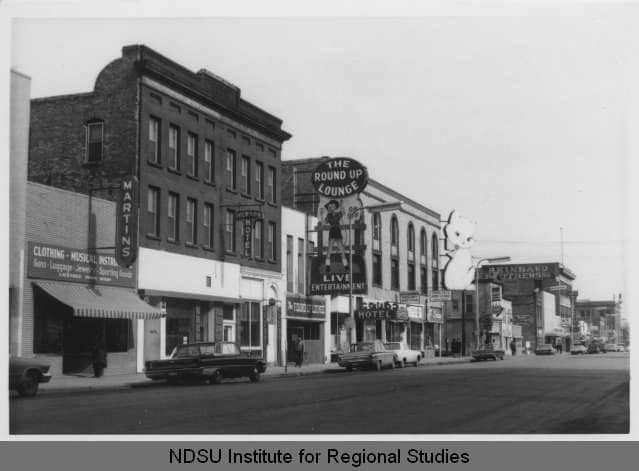 We couldn’t be happier that a certain pink feline sign found a new home at such an amazing local lounge! Thank you to Jeff and the NDSU Archives for providing some insight into the glory days of the Pink Pussy Cat Lounge. A lounge that used to grace Downtown Fargo until around the 1980s when things seem to have taken a turn for the modern due to some darn thing called a shopping mall. Either way, we are so happy that the Fargo-Moorhead and surrounding communities appreciate some of the old, finer things in life especially if they are surrounded in pink neon!