Did you know that signs have ghosts? We couldn’t think of a more fitting time to feature our first ghost sign of the former Bison Hotel. While ghost signs might not haunt you like Michael Myers from Halloween, they will leave a lasting impression. A ghost sign is an old (usually) hand-painted sign that has been preserved on a building for quite some time. Ghost signs are found across the world and are often called fading ads or brickads. These signs were painted on brick by “wall dogs” using oil-based paints. Most ghost signs that you can still see today contain lead which keeps the sign adhered to the surface. Many ghost signs remain today due to efforts to preserve the sign’s history which leads us to our featured ghost sign – Bison Hotel. 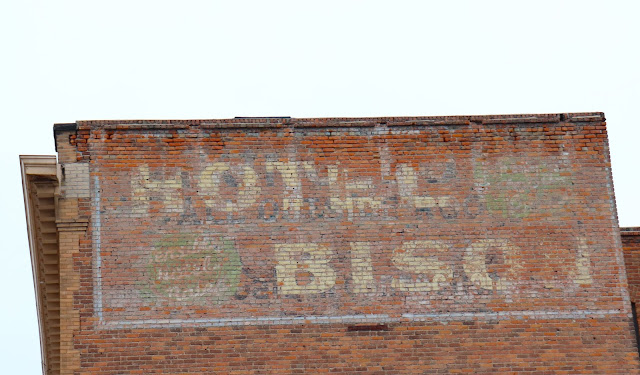 The building was originally built in 1905 as the Viking Hotel and was remodeled in 1940 being reopened as the Bison Hotel and Coffee Shop. The Bison Hotel did change ownership throughout the years from the original owners Ole C. (Chris) Lindvig and Christ A. Losness to Charles H Porrit in 1910. In 1940 the hotel was sold to Gomer D. Anderson and K.S (“Sparky”) Davey who remodeled the building and reopened it as the Bison Hotel, with the sign painted shortly after. In 1945 the Bison was sold to A.H. (Andy) Anderson followed by Loehle B. Gast and Robert Gibb Jr. The hotel/cafe closed in 1972 but held many memories prior to it’s closing. The Bison Cafe was noted to be a teen hangout during the 50s and 60s. It was also a safe haven for train workers as it was close to the depot. Train workers weren’t the only guests of the Bison Hotel…many carnival workers would stay there when the carnival was in town! 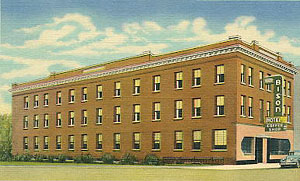 On our search for the elusive history of this Fargo ghost sign we encountered many individuals who would rave about the steak deals at The Bison Hotel. One could enjoy a delicious t-bone steak with fries and toast for only $1.09. We know times have changed since then but this still sounds like quite the deal! Not to mention that there were different colored cows placed in your steak to indicate how well it was cooked! Loehle Gast, who happened to manage the Bison Hotel and was also the head chef in the 1940s was a moving force behind the Fargo Kiwanis Pancake Karnival. Loehle was also the main Dale Carnegie instructor in Fargo for many years and was in the Senior Corps of Retired Executives (SCORE)! Loehle wasn’t the only talented individual to grace the Bison Hotel. The lobby of the Bison Hotel was home to a radio show on KVOX 1280 AM with a theme song “there’s a small hotel with a wishing well, I wish I was there.” We wish we were there to hear the tune and see some of the amazing stories we’ve been told in person! 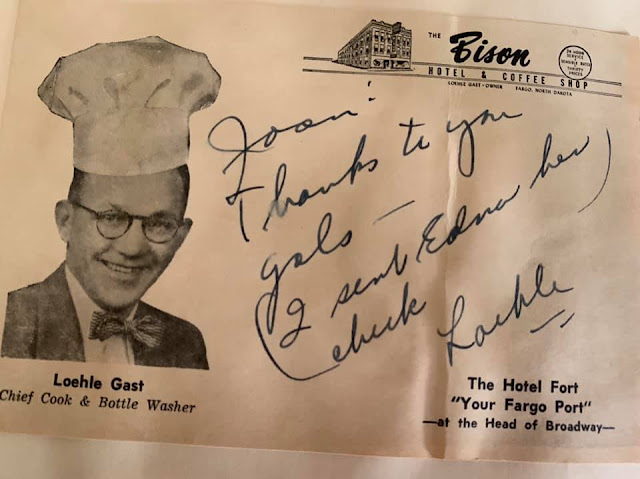 Break a leg…& sell a couch

After the Bison Hotel closed in 1972 it was sold to Marshall and Lowell Goodman who were going to turn the space into condominium office space; however, the banks refused. A group of tenants made up of actors, graphic designers, musicians, architects and artists were able to keep their space and turned part of the hotel into the Northwest Stage Co. The theater closed in 1976 due to a dispute over building ownership. Fast forward to 1977 when Larry Bosma, of Broadway Furniture, rented the main floor and basement of the old hotel. The second and third floors housed the Fargo-Moorhead YMCA until 1986; after, the floors were converted into apartments. The first floor held Broadway Furniture store until the fall of 2000. 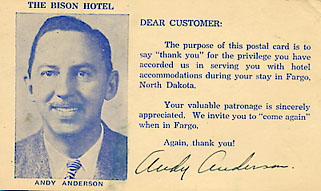 We hope this blog didn’t spook you too much this Hallo-week! We had a great time tracking down the history, tunes and tales of the Bison Hotel ghost sign. From interior office signs to ADA braille signs to ghost signs…no task is too tall for the sign busters. *Cue music* If there’s a unique sign in your neighborhood who you gonna call? (Signbusters!) If there’s ceiling signs and they don’t look good who you gonna call? (Signbusters!) We aren’t afraid of no ghost (sign)! You better boo-live no sign is out of reach for Office Sign Company. Contact us with all of your signbusting needs!


*Special thanks goes out to the NDSU Archives for their assistance in writing this article and providing historical information.*