Signs of Fargo’s Past: The Forum

Did you know that before newspapers there were government bulletin signs that were carved in metal or stone to be posted in public areas? Talk about your ancient history of information bearing signs! Now journalists don’t miss a beat – including one of our downtown neighbors. This week we met with the CEO of The Forum of Fargo Moorhead himself to learn a bit more about an iconic sign that has topped the home of Fargo’s finest journalistic minds. Hot off the press – we are proud to present Signs of Fargo’s Past: The Forum: 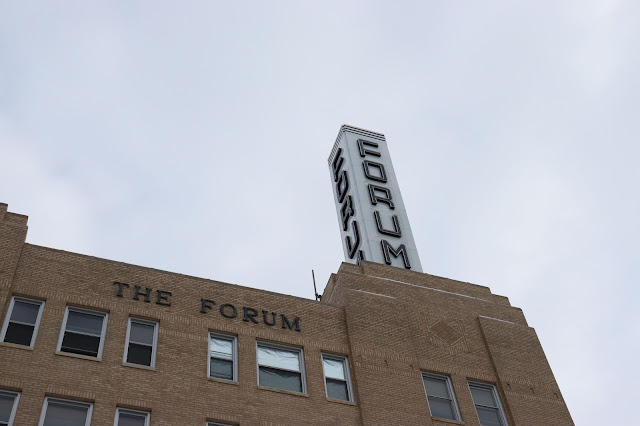 Nearly every city has a newspaper and Fargo’s started off in 1873 all the way back to the Fargo Express. The first publication of the Fargo Forum was on Nov. 17, 1891. The paper continued to change hands throughout the years due to financial problems. On April 1, 1966 the name was changed to The Forum, and no that’s not an April fools joke! The new publisher was Willian C. Marcil, son-in-law of Norma D. Black, Jr. Bill Marcil continues to serve as publisher for the publication and has expanded The Forum into Forum Communications, a multi-media company. The Forum has called many buildings home – it’s current residence was built in 1926 and was formally opened in 1927. The history of our sign starts there although much of it still remains a mystery. 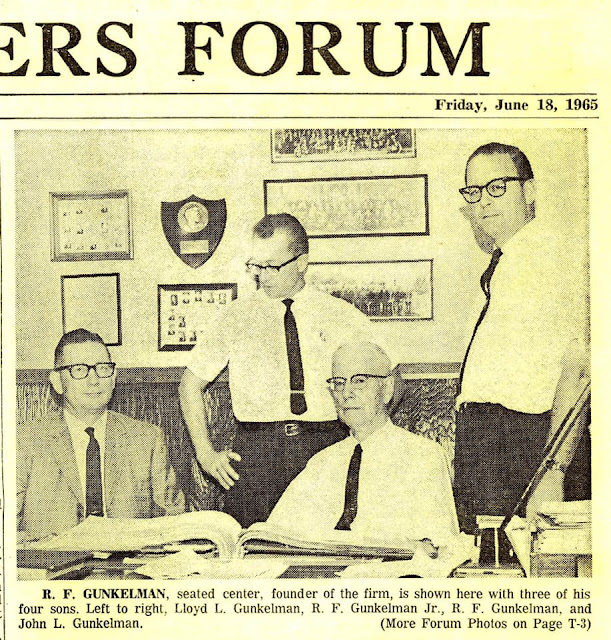 It seems as if everyone we talked to had a story of the newspaper from years ago. Whether it was being a paperboy standing on the corner yelling “FARGO FORUM GET THE LATEST NEWS.” The sign behind the publication was originally a horizontal neon sign. This sign went up in 1926 when the Forum’s building was only three stories. In 1938 two more stories were added and a similar sign as we see today was added. No one is quite sure why the sign was the way it was. In 2006, the sign was taken off the building to be reinforced and fully replaced with new steel panels and LED lights. Why the sign changed from horizontal to now gracing the skies with its vertical height remains a mystery. Now it stands tall as one of the many landmarks in downtown Fargo! 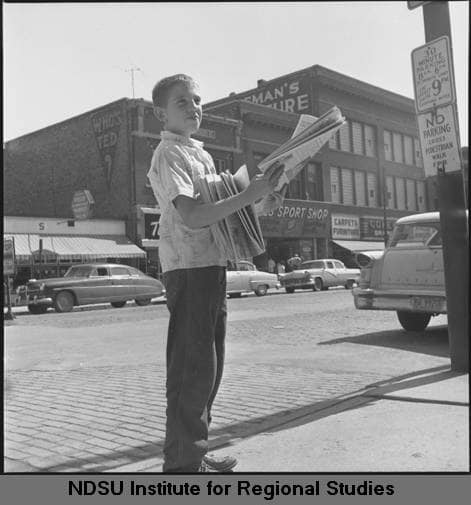 When talking with Bill Marcil, Jr. we learned that he went into the family business. Norman B Black, Bill’s Great Grandfather, purchased the newspaper in 1917. Bill is the fifth generation family member to work there. His nephew Bill is the 6th, starting just about a year ago. The company started as one newspaper and today is over 100 websites, 80 print titles, 4 ABC tv stations, an AM radio station and a commercial printing division. Not to mention their over 1400 employees in four states! A proud family business representing a very proud Fargo community. 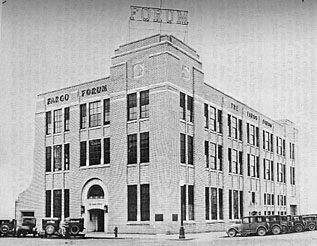 Photo courtesy of the NDSU Archives
While pieces of this historic sign remain a mystery to many – we were honored to hear the stories of the sign and the publication that is part of Fargo’s history. From the green “Farmer’s Forum” to paperboys standing in downtown Fargo distributing the daily news, Forum Communications has contributed to the success of our local community. We were honored to meet with Bill Marcil, Jr. to learn a bit more behind the tall sign that has topped the residence of so many news stories. We would also like to thank the NDSU Archives for their wealth of knowledge and collection of historic photos!